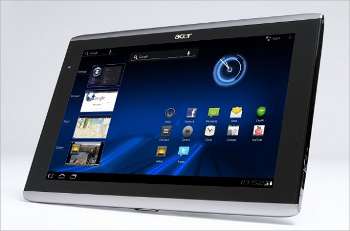 April 20th will notice the launch of first ever dual core processor based, Nvidia Tegra powered tablet computer by Acer.

Acer is all set to introduce its Iconia tablet computer on April 20th. Acer Iconia, which was showcased during Mobile World Congress, 2011 in Barcelona, has been touted as the most powerful tablet computers of these times.

Iconia is the first ever tablet computer to feature a dual core processor along with a Nvidia Tegra graphics engine. It will be available in a bigger 10.1 inch form factor and a smaller seven inch form factor as well.

Iconia will also feature a 512 MB of RAM for seven inch version and 1GB for the 10.1 inch. Whereas the on board storage, which also doubles up as ROM, is 8GB for the 7 inch and 32 GB for 10.1 inch tablet version.

Based on Google’s latest tablet PC operating system, the Android Honeycomb 3.0, both the tablet computers will come with a custom user interface optimised for the tablets size.

As of now, Acer has plans to launch these tablets in UK first followed with other parts of the world. Priced at GBP 299.99 (Rs 21500) and 449.99 (Rs 32,000) respectively, these are available for pre order on popular shopping stores such as Amazon.

Although these tablet computers are expect to be available in India sooner but people here can buy these from websites such as the Shopyourworld.com and Ebay.in.